It is not what you think it is.

A photo of Bernard Arnault playing casual chess with his son recently caught everyone’s attention. The owner of LVMH and the new owner of Tiffany & Co. was wearing an impressive timepiece. Initially, it looked like he was wearing one of the 170 unique Tiffany-Blue Patek Philippe Nautilus 5711 pieces that were released in December. However, he wore a rarer timepiece, the Tiffany-Blue Nautilus Perpetual Calendar 5740.

The Tiffany-Blue Nautilus Perpetual Calendar 5740 worn by Arnault is encased in white gold and equipped with a mid-blue dial. It resembled a TAG Heuer Carrera, which  boasts a perpetual calendar sub dial lettering and a moonphase window.

The cost of Tiffany-Blue Nautilus Perpetual Calendar 5740 is remarkably high. It is way more expensive than the “Tiffany Blue” Nautilus that was released on December 11. For context, one had to pay $52,635 (AU$73,318) just to get a 5711. One of the ultra-rare Nautilus 5711 watches had hit the auction block when the public was given the rare opportunity to try their luck and buy one for themselves. It caught the attention of three wealthy bidders who helped raise the “Tiffany-Blue” Nautilus’ gavel price to more than 100 times that of retail. Eventually, it had a gavel price of $5,350,000 with an all-in cost of $6.5 million.

Bernard Arnault is not the first famous person to flaunt a rare watch. Over the centuries, Patek Philippe has created custom order or unique watches for many wealthy and well-known individuals like J.P. Morgan, James Ward Packard, and Henry Graves Jr, among many others. So, seeing the Perpetual Calendar 5740 on the popular man’s hand is not exactly a shock. 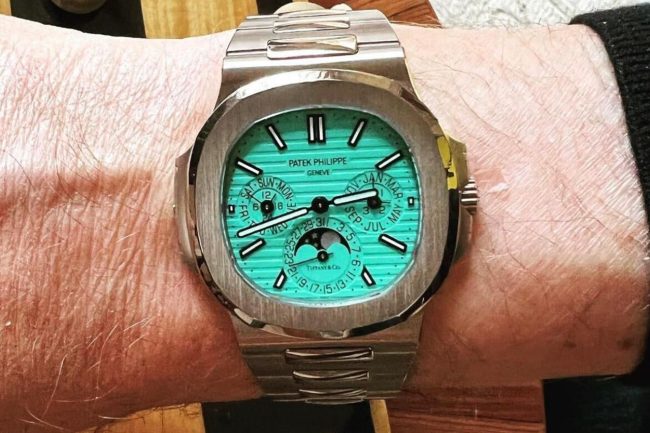 There is no doubt about the fact that Arnault is among the top wealthiest and attention-grabbing people on the planet. He can certainly afford Perpetual Calendar 5740. In fact, some people believe that the Patek Philippe Tiffany-Blue Nautilus Perpetual Calendar 5740 is the modern-day equivalent of the legendary Henry Graves Supercomplication.

Though no one knows how Arnault got his hands on the Patek Philippe Tiffany-Blue Nautilus Perpetual Calendar 5740, it is clear that if this timepiece is auctioned, it will surely set new records.