Balenciaga and Yeezy are Currently the World’s Hottest Brands

Lyst unveils a list of the hottest brands in the world every quarter. That is typically based on the most search hits for different brands. Sometimes, the results end up being surprising, while usually, there is nothing out of the blue. In the Q3 of 2021, it turns out that Balenciaga and YEEZY are the hottest brands.

So, the results of this quarter are not surprising enough for most people. Technically speaking, YEEZY is not on the top brand list. However, it still tops as the world’s hottest brand. Earlier, Kanye’s brand remained on the Q2 list as well.

It is quite impressive that the searches for YEEZY went up by 411% in this quarter. Though, it still does not meet with the impact that Balenciaga seems to have. Over the last few months, Balenciaga has successfully pulled off several feats.

For instance, we saw co-signs from Kanye, Kim, and other friends that boosted the brand’s presence. At the same time, the hand-in-glove mask by Demna Gvasalia, the creative director of the brand also further made Balenciaga one of the hottest brands of Q3.

Other than that, how can one forget the partnership between Balenciaga and the DONDA experience by Kanye followed by the merchandise release? All of that also played a huge role in pushing the company higher in the hottest brands list.

Followed by that, the co-signs in Met Gala and the campaign with Justin Bieber further helped the brand in increasing its visibility. Eventually, Balenciaga also decided to enter the world of gaming by collaborating with Fortnite, after which a 505% increase was noticed in Balenciaga searches overnight.

The partnership with Simpsons earlier this month eventually marked a significant increase in Balenciaga’s rank among the hottest brands.

If the brand continues with the same shenanigans, it is very likely for it to take another spot in the Q4 list of the world’s hottest brands. 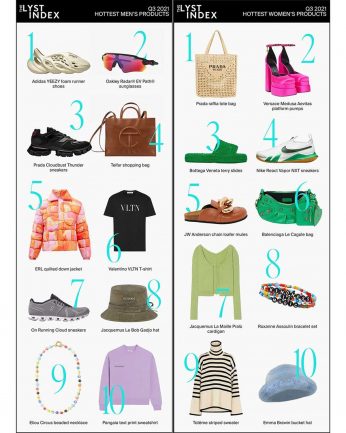 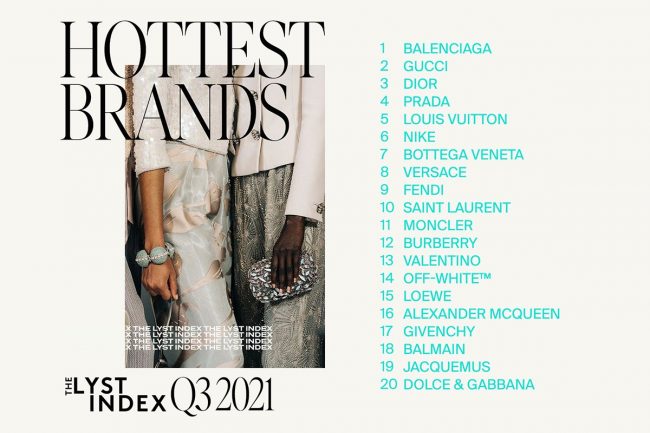 Lyst has also reported some other findings, some of which might be surprising. For instance, it reports that Y2K fashion is currently booming. Similarly, the Versace and Fendi partnership has also led to an increase in ranks.